The introduction of H370, H310, and B360 chipset motherboards at the beginning of April 2018 brought a new lineup of Coffee Lake motherboards into the mix of already existing Z370 mainboards. They all run on the latest Intel® 8th Gen Core processors, but what separates them from one another? What are the differences and which one is best suited for your specific use case? With GIGABYTE AORUS motherboards to back up the new Intel chipsets, you can't go wrong in setting up your computer system. 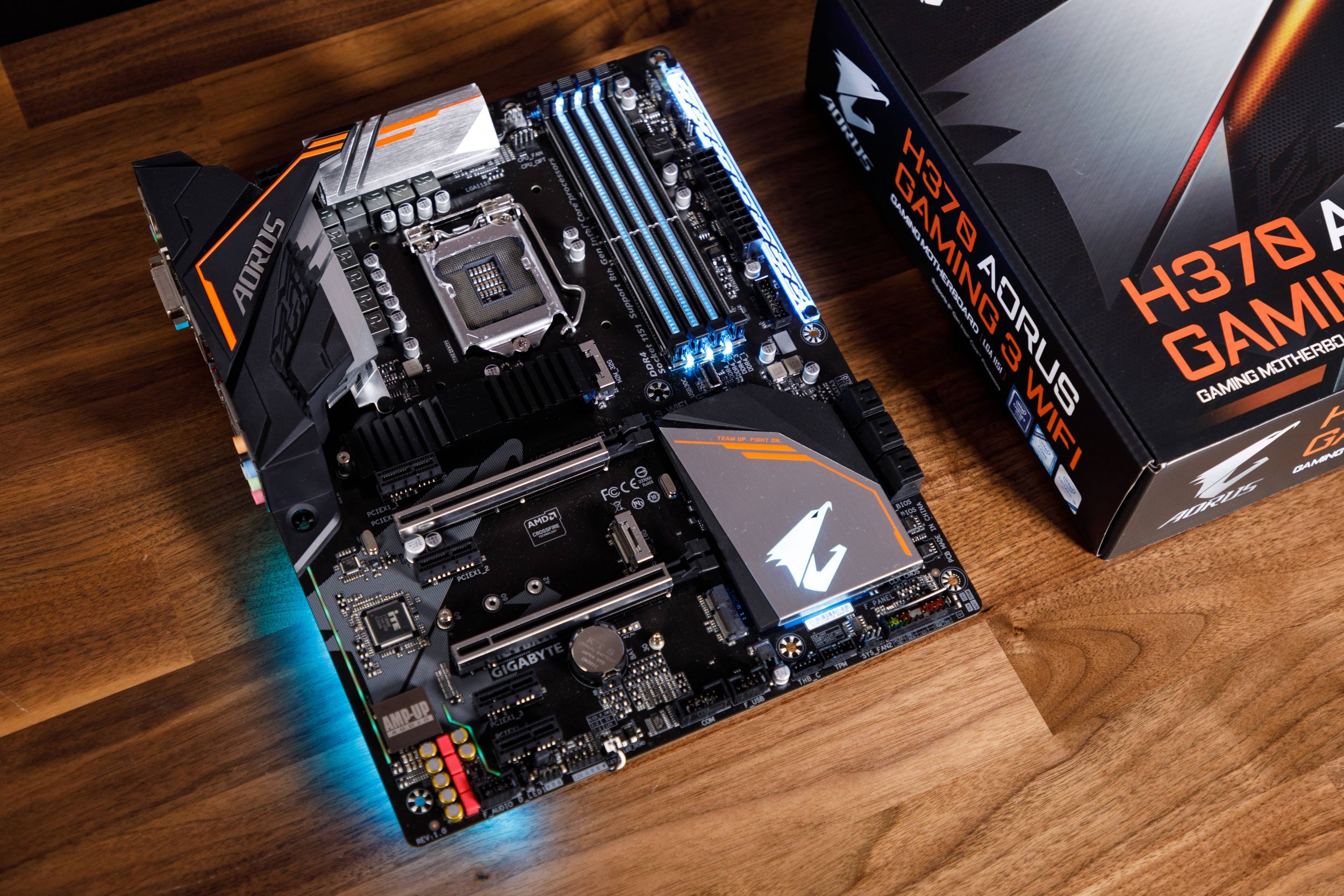 First of all, what is the chipset anyway? We have come a long way in computer hardware and if you are keen enough to remember terms like Northbridge and Southbridge then you know that things have advanced since those times. Every CPU is supported by a chipset that bridges peripheral connectivity to various components onboard with the Northbridge in charge of high-performance tasks like the CPU, PCIe, and RAM. Essentially, the chipset acts as a traffic controller opening channels for components to communicate. Modern Intel CPUs have taken over the Northbridge duties and the Southbridge has become the Platform Controller Hub (PCH) which delegates the remaining duties including the I/O controller, IME, and more.

How does all this factor into the various motherboards launched alongside new CPUs? The new H370, H310, and B360 chips compared to Z370 released late 2017 take a step down in terms of performance, features, and price. Although compatible with all existing 8th gen CPUs, high-end enthusiasts can skip over these lower-end chipsets in wait for the next upgrade. However, a major portion of desktop users will find that the new chipset motherboards from GIGABYTE AORUS provide a lot of value if you haven’t upgraded to the latest Coffee Lake CPUs yet. This means gamers, creators, and power users in need of a low-cost system can benefit without sacrificing too much in features and performance.

Below you will find a breakdown of the specification differences between each chipset. Although only Z370 is capable of overclocking, it does miss out on a few features that are introduced on the recent chipsets. This includes integrated Intel Wireless-AC support, integrated SDXC (SDA 3.0) support, and native USB 3.1 Gen2 support (without the need of 3rd party controllers). 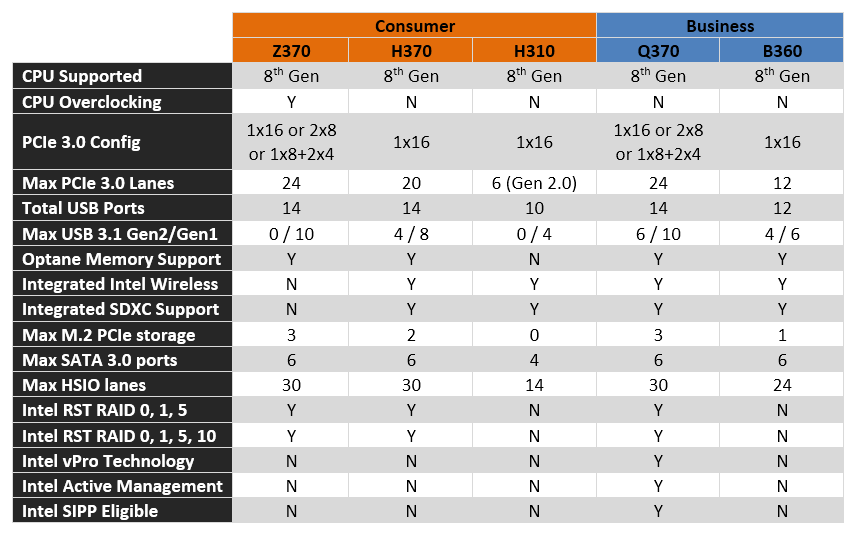 Going hand in hand with cost-effective chipset models is the capability to run Intel® Optane Memory on new and current GIGABYTE motherboards. What is Optane Memory? The quickest way to explain the technology is that it will speed up load times on your slow SATA Hard Disk Drive (HDD), the one with the spinning disks. Essentially, Optane Memory will learn a system’s app usage to store the more frequently accessed parts to keep on its memory drives for quicker reads. With the most recent update, this technology will now be accessible to a data drive instead of your dedicated boot drive allowing the essential operating system to run on fast SSDs while keeping large capacity HDDs in the same fast lane.

The latest update allowing data drives to be used has given storage an impressive bump in utility performance and GIGABYTE will include pre-installed Optane Memory drives on select motherboards for an incredible added value. 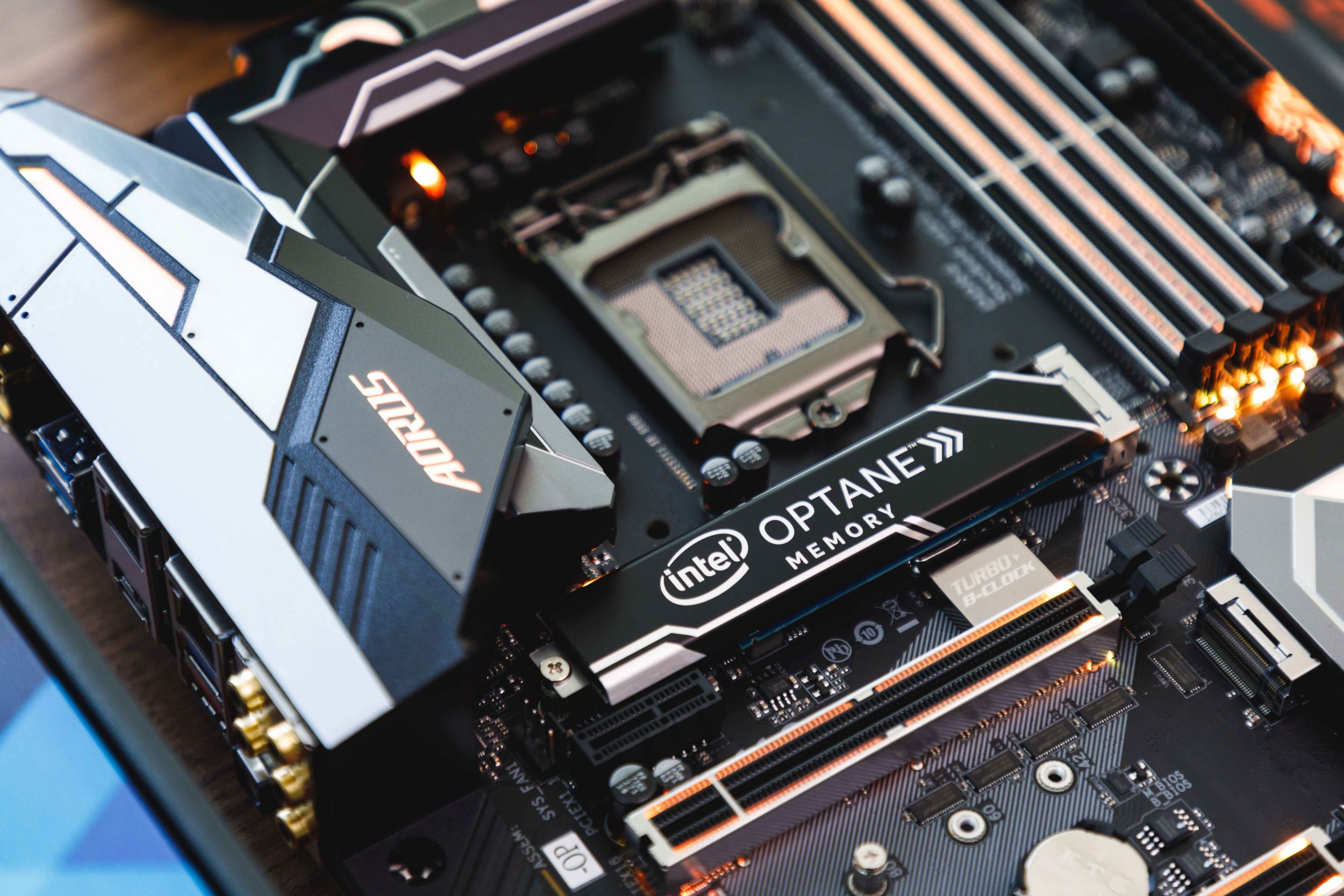 Looking at the wide scope of specs listed you can see that certain enthusiast features missing on the Q, H, and B chipsets are not deal breakers when the right system setup is in place. The recently released H370, B360, and H310 motherboards provide a budget-friendly option while taking advantage of 8th Gen Intel CPU performance.

When it comes to the H370 chipset, it represents the most features for a mainstream desktop user not looking to overclock or tweak settings too much. While multi-graphics are ‘supported’ on these motherboards, it isn’t recommended as they primarily run a single PCIe x16 lane at full speed with the 2nd x16 slot running at x4. Modern GPU architectures are most efficient with a single graphics card but users who find themselves with a multi-GPU setup should not be deterred. This a perfect solution for power users on a budget with an impressive price per performance ratio. From the internal and onboard components to the build quality and aesthetic, this motherboard is a great pairing for gamers with non-K Intel CPUs. 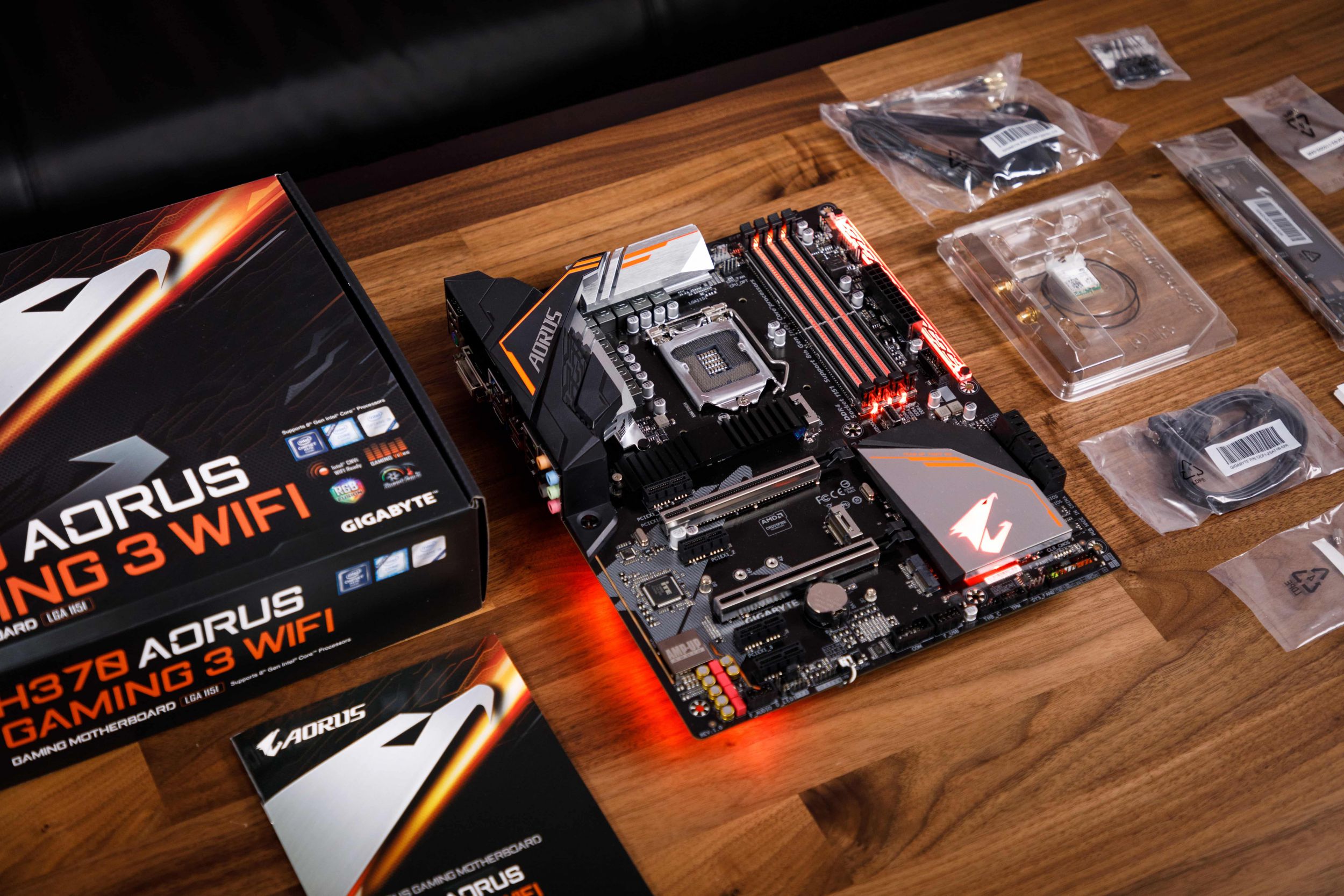 What sets the H370 AORUS Gaming 3 WIFI apart from the rest of the new chipset boards is that it shares more peripheral features of a Z370 board than usually seen in H models. With an expansive RGB Fusion display and robust aluminum heatsinks covering a durable VRM, the H370 flagship doesn’t look far off from a high-end Z370 model. The mainboard is also equipped with stainless-steel armor over the PCIe and RAM slots providing extra rigidity alongside an included M.2 Thermal Guard for fast NVMe drives. The newly integrated Intel Wireless-AC comes natively to the chipset but will require an Intel 11ac 2x2 CNVi WAVE2 card that comes included on WIFI edition mainboards. The new Intel WIFI chips boast upwards of 1.73Gbps. These additions all indicate a gaming system primed for future installments with a reasonable price.

Going down to the B360 chipset changes things on a more internal level by small decreases in the available bandwidth with High Speed I/O lanes affecting USB. To counter balance the reductions, the B360 AORUS Gaming 3 WIFI shares a single USB 2.0 port with the CNVI WIFI module port. The B360 compared to the H370 also drops the back-panel Type-C port to USB 3.1 Gen1 speeds and doesn’t have an internal Type-C header. These small discrepancies don’t take away from the overall experience and performance as the B360 model still has many of the juicy features like NVMe M.2 with an included Thermal Guard, RGB Fusion support, strong build quality, and integrated CNVI WIFI. The cost value for the B360 AORUS Gaming 3 WIFI hits the sweet spot for users needing to save just a little bit more for other parts to build a complete system that can handle the latest game titles. 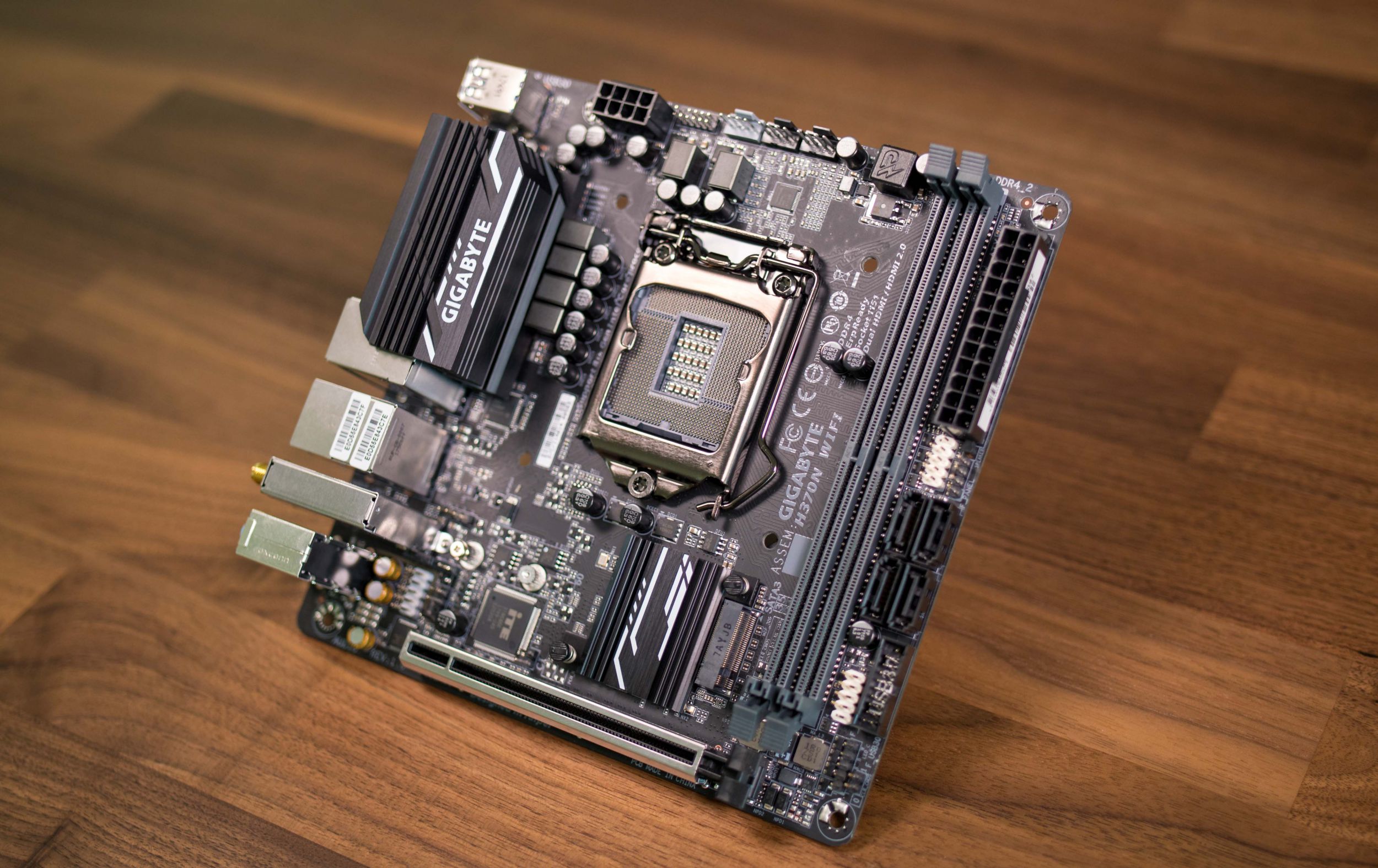 One thing that these new chipsets provide that some might forget to think about is that with overclocking disabled, the low power profiles benefit users interested in smaller formats. Low TDP CPUs just released by Intel alongside these chipsets is not by coincidence but by design. Small form factor enthusiasts should take interest as lower power components allow for slim and intricate cooling designs. Smaller systems with better thermal performance make a perfect portable LAN party setup or a stealth living room Home Theater PC. This is a major reason why H and B chipset models feature various non-ATX form factors such as the H370N WIFI, B360N AORUS Gaming, B360M Gaming HD, and many more.

If you are looking to build a secondary budget Coffee Lake machine or a light and portable setup on the go, then these GIGABYTE AORUS motherboards fit the bill without sacrificing too much off the top.